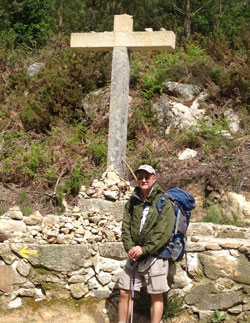 On pilgrimage to Santiago de Compostela

Your Host
I have been the Executive Director of the Aquinas Center of Theology at Emory University since 2008. It is a Catholic academic center about to celebrate its thirtieth year. Prior to my current position, I was the Director of the Leadership Certificate Program at the School of Public Policy at Georgia Tech. Before that I was the Patricia A. Hayes professor of ethics and leadership at St. Edward’s University. And before that I was a trial lawyer for ten years.

Books: Between Science and Religion and Returning to Reality, Thomas Merton’s Wisdom for a Technological World.

Hobbies and Special Joys: Hiking the Appalachian Trail-so far 720 miles, travel (45 states, 24 countries), reading, live theater, debating with my son, anything with my wife, going to LSU football games, a good glass of wine, and training my perfect Golden Retriever, Clarabelle, to be a therapy dog, the Atlanta Braves, Walker Percy.

Where I got the name, Sovereign Wayfarer.
This is an expression of the novelist and essayist, Walker Percy, my favorite writer. Lost in a world that is detached from its traditional moorings of faith, family, culture, etc. the postmodern person is set adrift. If a postmodern castaway becomes aware of this fact, they can consciously (by taking up the sovereignty of their quest) initiate a search for meaning in this context becoming a pilgrim or wayfarer. Such a sovereign wayfarer tries to answer questions of ultimate concern in a search for wisdom that is heading in the direction of an ultimate source of meaning. Can they succeed? Lets hope so.

About Your Host: “Questions People Should Ask Me? (A self-interview)”

1) Are you a progressive or traditional Catholic?
Yes. Read my articles and books and you tell me. I like to think I am the last centrist Catholic in the United States. This makes almost everybody in the Church uncomfortable. We centrists should be on the endangered species list.

2) Is the Catholic Church liberal or conservative, Republican or Democrat?

3) How do you select speakers or programs for the Aquinas Center?
Well we have set some key priorities set by a strategic review process of my board. These priorities include contemporary moral issues, Interfaith and ecumenical dialogue, growing the Catholic scholarly presence at Emory, and advancing a more vibrant Catholic culture. Speakers must have strong credentials and abilities to communicate. Since our resources are limited, sometimes access to funding for a program is a key.

4) What bugs you?
These are perhaps only unfounded prejudices but in no particular order-Dan Brown, Jean Jacques Rousseau, academic snobbery or insularity, the New York Yankees, any school that has orange in their colors, those who label others too quickly based on insufficient information or reflection, and any movie or TV show about the law. Finally-the willfully ignorant.

6) What are some things nobody knows about you?
I do impressions. I have my own language for communicating with my family called chang slang, I would secretly love to be a novelist or a film director. I was in Atlanta Fulton County Stadium when Hank Aaron hits his 715th home run.

7) What expressions do you often use in class?
“No you don’t get extra credit, but you will get something more important: my respect and admiration.”
“Do I curve grades? No, if you want to see a curve, go to a mountain road.”
“What kind of grader am I? Hopefully fair and just.”

8) Things I will always bring to class:
A love of my subject and students, coffee.